The Pathfinder (PBE) and Adventurer (ABE) Bible Experience in 2023 will involve the study of the book of John, providing an opportunity for the young people in their pursuit of their Saviour to live changed lives, in contradistinction to the extravagant lifestyle of the world.

The next season of the Pathfinder (PBE) and Adventurer (ABE) Bible Experience is around the corner, starting with Area testing in January 2023, followed by Conference and Union-level testing in February and March, respectively. The 2023 season will culminate with the Division Finals in Tampa, Florida (North America Division finals) and Athens, Greece (Trans-European Division finals) in April 2023. A thorough preparation is required to get the best out of these two programmes,  from self-study, revision and practice, culminating in the actual testing.

The primary purpose of the Bible Experience is to promote and encourage in-depth Bible study and memorisation, which aims to lead to an increased understanding of scripture and the growth of one's relationship with Christ. The 2023 Bible Experience will involve Pathfinders studying the whole book of John, whereas the TED version for Adventurers consists of studying the first eight chapters of John. I am excited about our teams taking part in this experience again, not least because John's book is my favourite gospel. In John's gospel, you get a sense that most of the fundamental beliefs are expounded so well just in the narration of the life of Jesus Christ. The author, John, the disciple whom Jesus loved, presents Jesus as the Son of God. One gets to personally experience Jesus from a unique perspective, unlike the narratives in the synoptic Gospels of Matthew, Mark, and Luke.

First things first, even right from the first chapter, we learn of the mystery of the incarnation. The first three verses set the scene very well "In the beginning was the Word, and the Word was with God, and the Word was God. He was in the beginning with God. All things were made through Him, and without Him, nothing was made that was made" (John 1:1-3), followed by the full revelation of the incarnation,"And the Word became flesh and dwelt among us, and we beheld His glory, the glory as of the only begotten of the Father, full of grace and truth" (verse 14). John makes the most remarkable statement that Jesus, the Son of God, became Jesus, the son of man. One has to marvel at the incarnation, as Jesus became the only one born to die to be our Saviour. This fact can also be gleaned from the meaning of His name from Matthew's account "And she will bring forth a Son, and you shall call His name Jesus, for He will save His people from their sins." (Matthew 1:21). He thus became the second Adam, born as the son of man. He lived on this earth and was tempted as we are, yet without sin. "For we do not have a High Priest who cannot sympathise with our weaknesses, but was in all points tempted as we are, yet without sin. (Hebrews 4:15). No wonder John the Baptist's testimony in the wilderness is more powerful "Behold! The Lamb of God who takes away the sin of the world!" (John 1:29). Jesus came to take away the sin (singular; the root cause of sin) of the world.

Jesus' testimony of His mission is at the centre of John's narrative "The thief does not come except to steal, and to kill, and to destroy. I have come that they may have life and that they may have it more abundantly" (John 10:10). How could Jesus do this on our behalf? He answers it for us, "I am the way, the truth, and the life. No one comes to the Father except through Me" (John 14:6) and "I am the resurrection and the life. He who believes in Me, though he may die, he shall live" (John 11:25). These two bold statements are only part of the seven emphatic "I am" statements recorded in the book of John.

The young people will also learn about one of the greatest missionaries – the Samaritan woman at the well – who, after that lone meeting with Jesus, went back to the village encouraging her people, "Come, see a Man who told me all things that I ever did. Could this be the Christ?" (John 4:29).

This encounter is preceded by the midnight dialogue between Nicodemus and Jesus that culminates in the most beautiful text "For God so loved the world that He gave His only begotten Son, that whoever believes in Him should not perish but have everlasting life" (John 3:16). The book of John does not disappoint, as one sees Jesus as the Son of God and the son of man, all for the sake of our salvation. Last but not least, the shortest verse in the whole Bible is hidden in the middle of the book of John, "Jesus wept" (John 11:35). This is but a short introduction to the marvels in the Gospel of John and as John himself declared "This is the disciple who testifies of these things and wrote these things, and we know that his testimony is true. And there are also many other things that Jesus did, which, if they were written one by one, I suppose that even the world itself could not contain the books that would be written. Amen" (John 21:24,25).

So, how can our Pathfinders and Adventurers get the most from the PBE and ABE? First, the interest must be genuine and based on the aspiration of a deeper study and understanding of God's word. The club leaders (Directors or Counsellors) must nurture this interest by giving the young people the platform to be part of the amazing journey. The official PBE guide is a helpful resource for the beginner, while ongoing yearly PBE resources are available on the NAD PBE website.

How can I make sure that my club benefits from these two programmes? First, your Conference or Mission will send all their clubs a registration link for teams in the PBE and ABE programmes. As a director, gather interest from your club members to see who would like to participate, then register them with your Conference or Mission. Upon registration, you can begin to study the chapters apportioned to the programme and take the children on a fantastic journey. Do not be dismayed if you are new to this programme and feel daunted by the task. "What then shall we say to these things? If God is for us, who can be against us?" (Romans 8:31). This year also sees our Pathfinders use the newly commissioned Andrews Bible Commentary on the book of John as part of the testing.

Anecdotally, I have found that the young people who participate in the Bible Experience are more likely to find it easier to get their Pathfinder and Adventurer workbooks completed and, in some cases, show improved performance in school curriculum work. There are no losers in the PBE and the ABE. All teams are winners as the young people engage on a spiritual journey that leads them to a saving relationship with the Saviour. 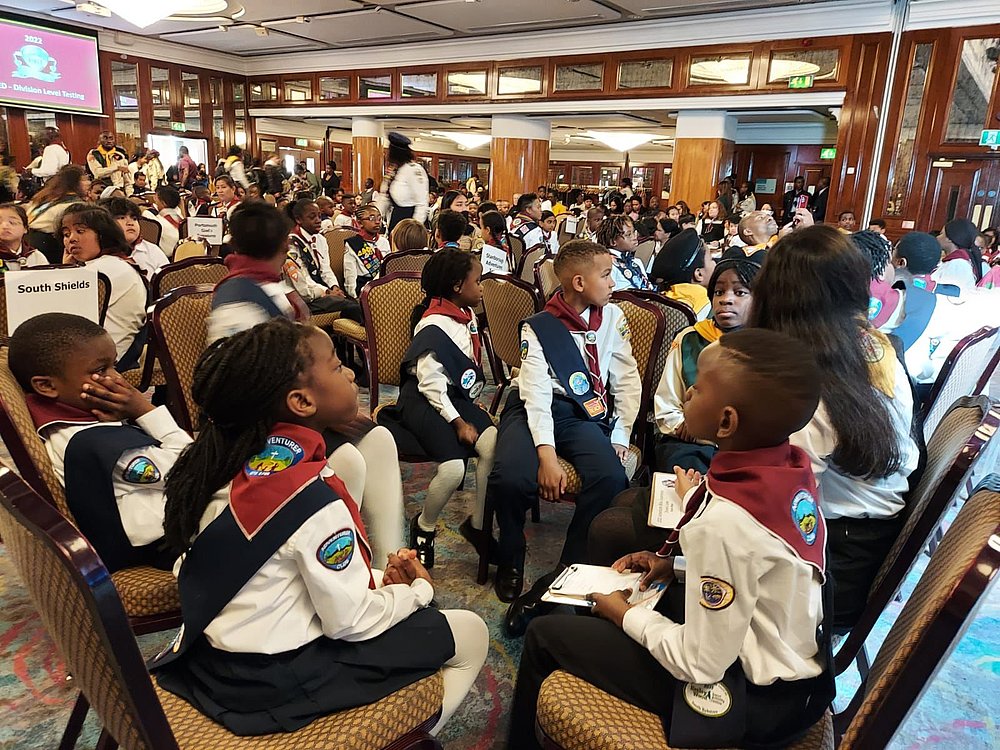 The Author, Dr Mandela Thyoka, is a Medical Doctor and serves as the Club Director of Doncaster Doves Pathfinder and Adventurer clubs in South Yorkshire.